How Google’s New Search Formula Will Affect You

It’s amazing how a hummingbird could raise such a ruckus. The most successful search engine on the planet – Google – has fundamentally changed the way it scours the Internet for information by changing its search algorithm. The company calls this algorithm “Hummingbird.” The folks at Google chose this name to convey greater precision and speed, and the billions of people around the world who interact with Google every day may not know it yet, but this changes everything.

The first generation of search engines relied on keywords tied to links to Web pages. As data associated with these searches has been analyzed, this process has become more sophisticated. The engineers at Google say they have found a way to deliver more relevant answers to these search queries without making the searchers click on links.

Here’s the New Search Deal
The Hummingbird algorithm uses a semantic approach to search. Basically, it seeks to understand the meaning of the search. Sounds simple and elegant, right?

It’s important to note that this new algorithm is not aimed at reducing spam or punishing those who purvey it. It is an attempt to display results and data more efficiently via a “Knowledge Graph” which will consist of side-by-side comparisons, lists and other quantifiable facts.

In a piece written for the trade publication Search Engine Land Danny Sullivan noted, “The goal is that pages matching the meaning do better, rather than pages matching just a few words. For example, a search for “acid reflux prescription” (previous to Hummingbird) used to deliver links to Web pages listing different drugs. New search results go deeper, focusing on information about treatments including risks of medications.”

There are ways to obtain more precise information with this new algorithm. When the search query is formulated in a manner that complement this semantic approach, say, if a search includes concepts such as “how, why, when or where,” terms which are more than likely associated with a voice on a smart phone, the query yields more precise information. Search experts have used the example of someone entering the query: “How do I tie a bow tie?” which would likely result in a video showing how this feat is accomplished. If the query was “bow tie,” a likely result would be a retailer that sells the tie. 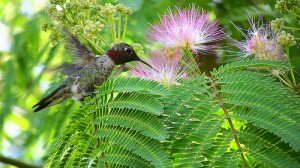 And the Winner Is…
Since Google is the dominant player in the search engine game, those whose living is made from consulting with clients or using effective search protocol – online retailers, search marketing consultants, search engine optimization experts, ad agencies and bloggers in search of an audience – must rethink their tactics (especially those who tried to game the Google system in the past).

This can be a boon or a bust for content developers and keyword-focused enterprises. Companies and individuals who built their business on search engine optimization focused on keywords should probably change their tactics or prepare to join the buggy whip makers in the Land of Irrelevance.

However, those marketers, content developers and search engine optimization gurus who can broaden their work to include the context as well as the content of the search process should flourish. Is this lemons or lemonade?

Don’t be Evil
While Google engineers such as Amit Singhal have publicly stated that the changes brought about by Hummingbird were “based on a knowledge graph of 500 million people, places and concepts” there are always suspicious souls who see these changes as self-serving on Google’s part. Human nature being what it is this has a ring of truth to it.

These changes seem to favor those companies who successfully bid on keywords sold by Google rather than those who execute organically based search strategies which use carefully constructed content. Google would argue that some if not most of this content was chock-full of superfluous keywords, which were designed to game the company’s system. There is, of course, truth in this analysis.

There’s also the matter of the Federal Trade Commission  (FTC), which decided to drop the antitrust case against Google earlier in 2013. The FTC spent two years investigating Google as being a monopoly and then decided they weren’t one after all. Needless to say, Microsoft (owner of Google competitor Bing), lobbied hard for prosecution but to no avail and the irony of Microsoft alleging monopolistic activities is darkly funny. Political trade publication Politico estimated that Google spent $25 million on lobbyists and lawyers to get the case no-billed.

Google fans would likely say this FTC (non) action allowed the company to continue to innovate and come up with whiz bang algorithms such as Hummingbird. Google haters would mutter something like “money talks.” Of course, these actions on the part of Google are self-serving, just as any other company would use their resources to build market share and generate profits for shareholders. However, it remains to be seen if the company is living up to its motto – Don’t be evil.