The American Revolution was in full swing on July 2, 1776, when the Second Continental Congress, composed of elected representatives from all 13 colonies, voted to legally separate from Great Britain. At the time, leaders such as Samuel Adams felt that this day – July 2 – would come to be celebrated as America’s Independence Day. However, as it turned out, in a show of independence from their elected officials, the people of this new country had a different opinion.

For two days after the Congressional vote, this body vigorously debated the wording of the Declaration of Independence, written in large part by Thomas Jefferson. This document was finally approved on July 4, 1776, and this tangible manifestation of the reasons and rationale for the American’s decision obviously resonated in hearts and minds of the people. July 4th began being celebrated as Independence Day.

It’s interesting to note that it took the actual publishing of the words and images of the “Declaration” to make independence real to the people of America. Seeing the actual words, beautifully written, on paper and posted on trees and storefronts was critical to building that sense of patriotism that carried the young country to victory. This suggests that Jefferson, in addition to being one of the Founding Fathers, was the original creative director. This same emotion – stimulated by compelling words and images – has been used many other times in the history of the United States of America and this is the subject of this week’s post.

The Pursuit of Happiness

Even 237 years later, the words of the Declaration of Independence can cause otherwise stoic, unemotional folks to get a lump in their throat. The brilliant prose of Jefferson, memorized by school children and analyzed by poets and writers for generations, is nothing short of lyrical. When this was printed on parchment, given a proper design and then posted, the effect was stunning.

We hold these truths to be self-evident, that all men are created equal, that they are endowed by their Creator with certain unalienable Rights, that among these are Life, Liberty and the pursuit of Happiness.–That to secure these rights, Governments are instituted among Men, deriving their just powers from the consent of the governed.

This document became a rallying cry for the ragtag group of citizen-soldiers. It served to galvanize the will of “the governed” and some have argued that without this Declaration of Independence, it would not have been possible for the United States of America to exist.

So, what is it about words and images which are arranged in a compelling format that transform them into motivation? The sense of patriotism that we all feel when we hear the national anthem or see the American flag passing in a 4th of July parade is a very strong emotion.

What are the visual triggers for these positive emotions, such as patriotism? Are there design and messaging techniques that can be used to motivate a population? What part, if any, does color play in stimulating emotions? For the answers to this, we talked with Prejean Creative senior art director Gary LoBue, Jr.

The Art of Emotional Motivation

Are there any colors or graphic styles that seem to trigger strong emotions? Why does the feeling of patriotism come over us when we look at our American flag?

Online references note that the color blue is associated with stability and is most often used to symbolize loyalty, confidence, faith and truth. In explaining why he feels blue and silver relate to our government, Gary notes, “Blue naturally draws the attention of the eye, it keeps you interested.” However, no color can overcome a disbelief in the system of government. “People can’t be patriotic without having a true belief in our system of government itself,” he adds.

During the time of the Revolutionary War, there was a limited number of media that could be used for motivational efforts, but now we have a wide range of media to employ in the process. So, would the tactics that the Founding Fathers used to build faith and patriotism using the Declaration of Independence work in today’s digital world?

Gary agreed that they would be effective today and referenced President Obama’s 2008 presidential campaign poster.  He said, “Agree or not, it’s positive propaganda. His ‘Hope’ poster evokes a hopeful response much in the same way that the Works Progress Administration (WPA) posters did during the late 1930s and early 1940s by promoting positive social changes.” 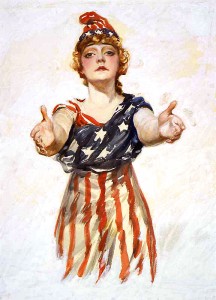 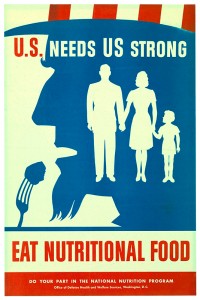 What about the media chosen for motivational activities? For example, do photographs trigger stronger emotions than illustrations? Gary feels that in some cases they do. In the case of Dust Bowl/WPA photographer Walker Evans his photographic images were painfully realistic but at the same time suggested hope. This is more compelling that say the illustration of the iconic “I Want You for the U.S. Army” poster.

“These Evans photos show two things, vulnerability and hope for help. You could tell from looking at these evocative photographs that these people knew help would eventually reach them. They captured patriotism as the human element,” he added. 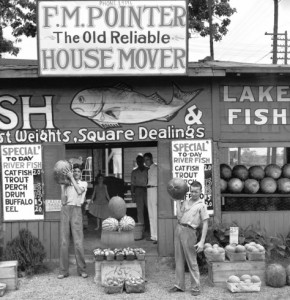 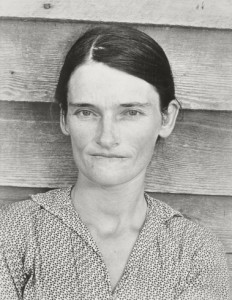 It’s been noted that those who do not learn from history are doomed to repeat it. Conversely, those who make an effort to understand and learn the lessons of history can greatly benefit. Such is the case with an appreciation of compelling design and messaging.

There have been many dire times in the history of the United States – World War I and II, the Great Depression, the 9-11 attacks – however deciding to declare its independence from what was the most powerful country in the world was a very serious decision and one that could have led to the execution of the leaders of the new Republic. Benjamin Franklin was absolutely correct when he noted that “we will either hang together or we must surely hang separately!”

As history has shown, Independence Day, was a critical step in the journey of building the world’s best known and most successful democracy. We owe some of this success to the men and women who managed to conceive the right words and images, at the right time to motivate citizens to collectively succeed in spite of the odds against them.

Although it needs to be reignited from time to time, there is an irrepressible spirit of independence in the DNA of every American. On this 4th of July, let’s remember that no matter what our gender, race, economic status or political party happens to be, we are all proud to be Americans.