Throw me something, mister! 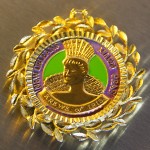 The spectacle that is Carnival in Louisiana is the perfect stage for all forms of creativity. With a unique concept to follow each year, krewes implement their themes through a variety of tangible materials – and, usually the more elaborate, the better, with virtually no expense spared. Doubloons, costumes, floats and invitations each serve as a creative outlet that set the tone for Mardi Gras celebrations year after year. Some of the traditions our culture revels in can be traced back to a few of the most notable krewes known for their themed parades, costumes and float designs. The artistry found in many of the krewes’ ball invitations and costume designs draw on themes of history, mythology, politics, literature and nature. Considered one of the most prestigious Carnival organizations around, The Mistick Krewe of Comus laid the foundation for our modern-day celebrations of Mardi Gras with its formation in 1856, according to Mardi Gras Treasures: Invitations of the Golden Age by Henri Schindler. Eventually serving as a model for future krewes, Comus transformed the format of Mardi Gras parades with their organized, themed displays of opulence. Their collections undoubtedly represent much of the artwork associated with the late 19th and early 20th centuries, which was primarily Victorian Decorative Arts, the Arts and Crafts movement and Art Nouveau.

These Krewe of Comus costume designs from their 1873 "Missing Links" parade are satirical depictions of relevant political figures of the Civil War era.

This Comus invitation from 1898 was one of the last displays of grand excess of ornament during the Gilded Age.

The Krewe of Rex has provided some elaborately themed invitations such as this Arabian Nights Tales from 1881.

The throwing of doubloons during Mardi Gras has also become a time-honored expectation since the 1960s and for many this practice has become an enduring symbol of Mardi Gras. Doubloons thrown by krewes usually depict the theme of the parade on one side and the krewe's emblem on the other. While parade doubloons are inexpensive keepsakes, krewe members collect jewelry quality doubloons or medallions.

The Krewe of Iris medallion (c. 1975), a dual-color, high-relief bronze doubloon in a special setting, was presented to the Krewe members during the club's annual meeting. These meetings were held prior to the Mardi Gras season to discuss the upcoming year's parade theme, as well as other important krewe details. 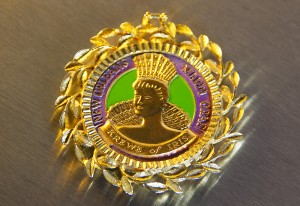 This mirror from the Krewe of Proteus (c. 1935) is considered a krewe favor or callout. A callout is a unique and cherished custom of New Orleans' Carnival balls. Ladies "called out" to dance were usually seated in a special section of the ballroom; at the end of each dance, the ladies were presented with a favor by their masked partners.

What creative mind wouldn’t love to indulge his or her artistic impulses in an event where almost anything goes? Happy Mardi Gras, y'all!

Lisa, an owner and responsible for business development, has a varied communications and marketing background. Her experience includes television broadcasting, arena marketing and higher education public relations. Lisa graduated from the University of Louisiana at Lafayette. Some things you may not know about her: Favorite movie is It’s a Wonderful Life. Was a news anchor & reporter in a previous life. Incurable chocoholic. Has been photographed with Miss Piggy, George Strait, Robert Palmer and Billy Joel. Novice fantasy football team owner. Appreciates humor and a well-written phrase.
View all posts by Lisa Prejean →
This entry was posted in Fun Stuff, Louisiana, Miscellaneous, Popular Culture and tagged Carnival, Costume, Doubloons, Krewe, Krewe of Comus, Krewe of Iris, Krewe of Proteus, Krewe of Rex, Mardi Gras, Mardi Gras Ball. Bookmark the permalink.