Getting into the Zone 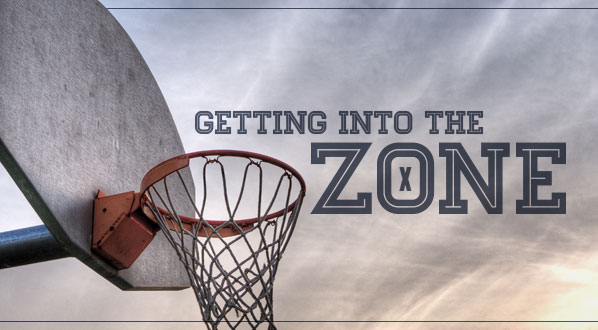 We’ve seen it happen too many times to be merely coincidence. A basketball player hits a couple of long shots and then becomes unstoppable. Everything he/she throws up is nothin’ but net. For some unexplainable reason, these players enter a kind of ethereal performance trance and take over the game.

This happens in other games, too. For example, there are baseball players who go on extended hitting streaks, hockey players who can’t miss the net, tennis players who blast ace after ace, quarterbacks who complete an uncanny number of passes in a row or golfers who sink a series of difficult putts.

This phenomenon of being seemingly unstoppable is known by a variety of colorful expressions.

Skeptical sports experts such as coaches, psychologists or other non-players have always equated this idea of “having a hot hand” as a myth. They chalked up this surreal play to serendipity. In the minds of these naysayers, the player who just hit 5 or 6 three-pointers in a row was just lucky. “There’s no hard evidence,” they say. “This is seeing patterns in randomness.”

Well, don’t look now but there is some hard evidence of the existence of having a hot hand and if this research is true, the favorites of the upcoming NCAA basketball tournament had better watch out!

New Research About Being in the Zone
According to the Wall Street Journal, “It turns out that popular intuition about the hot hand may have been right all along.” The newspaper, known for its business and not its basketball acumen, notes the Sloan Sports Analytics Conference, hosted by the Massachusetts Institute of Technology (MIT), will be the site where three Harvard grad students present their research validating the theory of the hot hand.

The paper, written by Andrew Bocskocsky, John Ezekowitz and Carolyn Stein, notes “a small yet significant hot-hand effect.”  As the WSJ notes, “They devised a formula that, for the first time, controls for variables such as a shot’s location and a defender’s position to better understand its difficulty. The hot-hand effect was masked in the past by the players themselves, the authors contend, since many attempted lower-percentage shots when they were “feeling it,” as the announcer Marv Albert would say.

After analyzing shots in better detail — they surveyed more than 70,000 from the last NBA season and cross-referenced them against play-by-play summaries — the authors say a player can be more likely, not less likely, to make his next shot if he has made several in row. Their hot-hand estimate ranges from a 1.2 to a 2.4 percentage-point increase in likelihood.”

This hot-hand research could also impact the NCAA tournament and the friendly wagers which will inevitably be made on these games. College basketball games are eight minutes shorter than NBA games, and the shot clock is 35 seconds instead of 24. This reduces the number of times each team has the ball, and thus increases the odds of an upset in the single-elimination NCAA tournament if an underdog team gets “hot.” It also can help a postseason favorite like eighth-ranked Creighton, which is tops in the country in three-point percentage.

Just a word to the wise when you’re putting together those brackets this year.

Maybe your days of playing basketball are over. Why should you even be interested in this concept of a player having a hot hand unless you have a friendly wager or two on the NCAA tournament? Here’s why.

If an athlete can be on a roll and virtually unstoppable, can this phenomenon extend to the real world of work? We’ve all heard the sports metaphors used in a work situation; e.g. that new product was a home run! In fact, many people – especially those in competitive industries – think of their job as a contest. Money is just a way to keep score.

This begs the question: Can companies have a hot hand? The simple answer is yes, they can. However, as your economics teacher probably noted, “the devil is in the details” and these details are made up of myriad and often subtle factors.

Unlike an individual player who starts lighting up the scoreboard, an enterprise can only get a hot hand when (1) factors in the market favor this and (2) it is prepared to take advantage of this opportunity. Getting a hot hand in business seldom (if ever) occurs in vacuum. To torture the sports metaphor even further, the playing field must be conducive to a company getting in the zone.

Recent business history is replete with companies coming from virtually nowhere to market dominance. Apple, Facebook, Google, just to name three, were companies that had brilliant leaders, innovative products, adequate capital and perhaps most importantly, strong market demand for these products. However, for every Apple there are hundreds of companies, such as BitCoin, which went from boom to bust in a very short time.

What Companies Have a Hot Hand Now?

The combination of market forces, innovative leadership and adequate capital are giving some companies a hot hand today. Recently, MSN Money picked five of these companies and suggested why they were in the zone.

I Think I Can
It’s exciting to see science confirming what athletes have always known. Getting into the zone, having a hot hand, playing lights out or getting on a roll is absolutely intoxicating, whether you’re an athlete or a company. Whatever magic causes this amazing experience it is likely tied to something Norman Vincent Peale coined many years ago – the power of positive thinking.

When you are absolutely convinced that you can do something, more often than not, you can.
Photo Credits: arturodonate , Scott* , ed_needs_a_bicycle , yersin via photopin cc

This entry was posted in Fun Stuff, Marketing, Popular Culture and tagged Getting into the Zone, Getting on a Roll, Harvard, Having a hot hand, KB Homes, MIT, NBA, NCAA Basketball Tournament, Norman Vincent Peale, Tesla, The Power of Positive Thinking, Yelp. Bookmark the permalink.