The 89th Academy Awards® ceremony is upon us and all eyes will soon be on Hollywood’s red carpet. The glitz, the glamour, the paparazzi – it’s almost palpable.

So what better way for us at Prejean Creative to get into the mood than to put on our tuxes, grab our tiaras and share the movie posters we believe raised the bar, pushed the art form or maybe even deserved that little golden guy.

May We Have the Envelope, Please!
Kevin Prejean’s Nominations:
From 1927, Fritz Lang’s Metropolis. An exquisite Art Deco and futurist masterpiece. Timeless.
Roman Polanski’s Rosemary’s Baby. From 1968, this poster exemplifies fear, loathing, psychosis and paranoia.
Otto Preminger’s 1959 classic Anatomy of a Murder. A Saul Bass masterwork of design and intrigue.
From 1979, Ridley Scott’s Alien. The hatching egg; the elegant type treatment; a sense of fear. In space, no one can hear you scream – a perfect visual execution of potential and kinetic horror.
Robert Altman’s 1970 anti-war comedy M*A*S*H. Very simple, a little bit odd, but truly a memorable image. 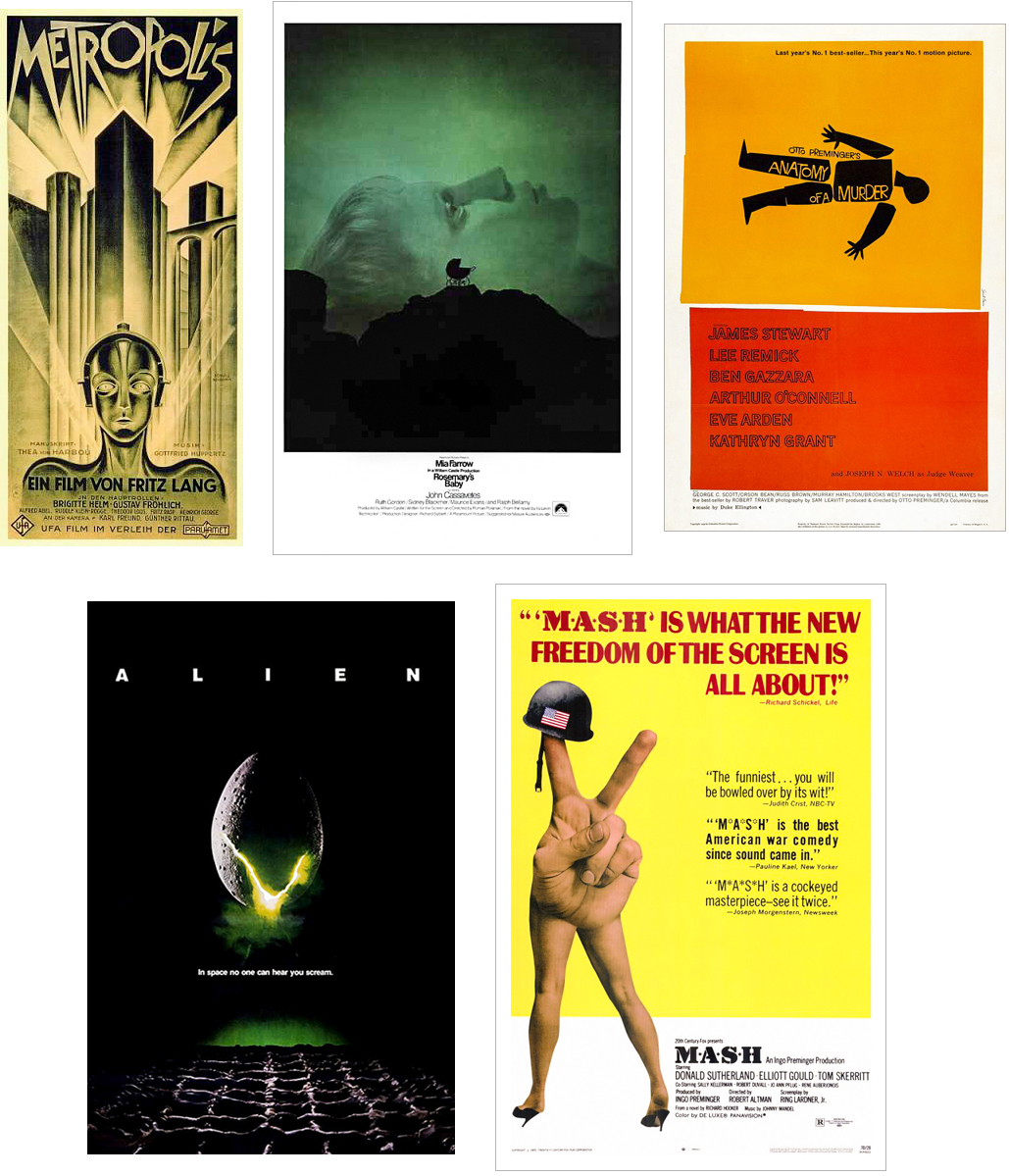 Lisa Prejean’s Picks:
From 1975, Steven Spielberg’s Jaws. While all seems normal above the water, something undetected and terrifying lurks just beneath the surface.
Joel Coen & Ethan Coen’s 1996 film Fargo. A cross-stitch of a murder scene; bizarre perfection for the Coen Brothers.
Mike Nichols’ 1967 groundbreaking The Graduate. An image just provocative enough to hint at the manipulation and temptations of the plot.
From 2016, Nate Parker’s The Birth of a Nation. Great symbolic imagery for a movie about a slave uprising.
2015’s The Hunger Games: Mockingjay – Part 2. The use of the black & white imagery with minimal touches of red is beautifully striking in this special IMAX edition poster. 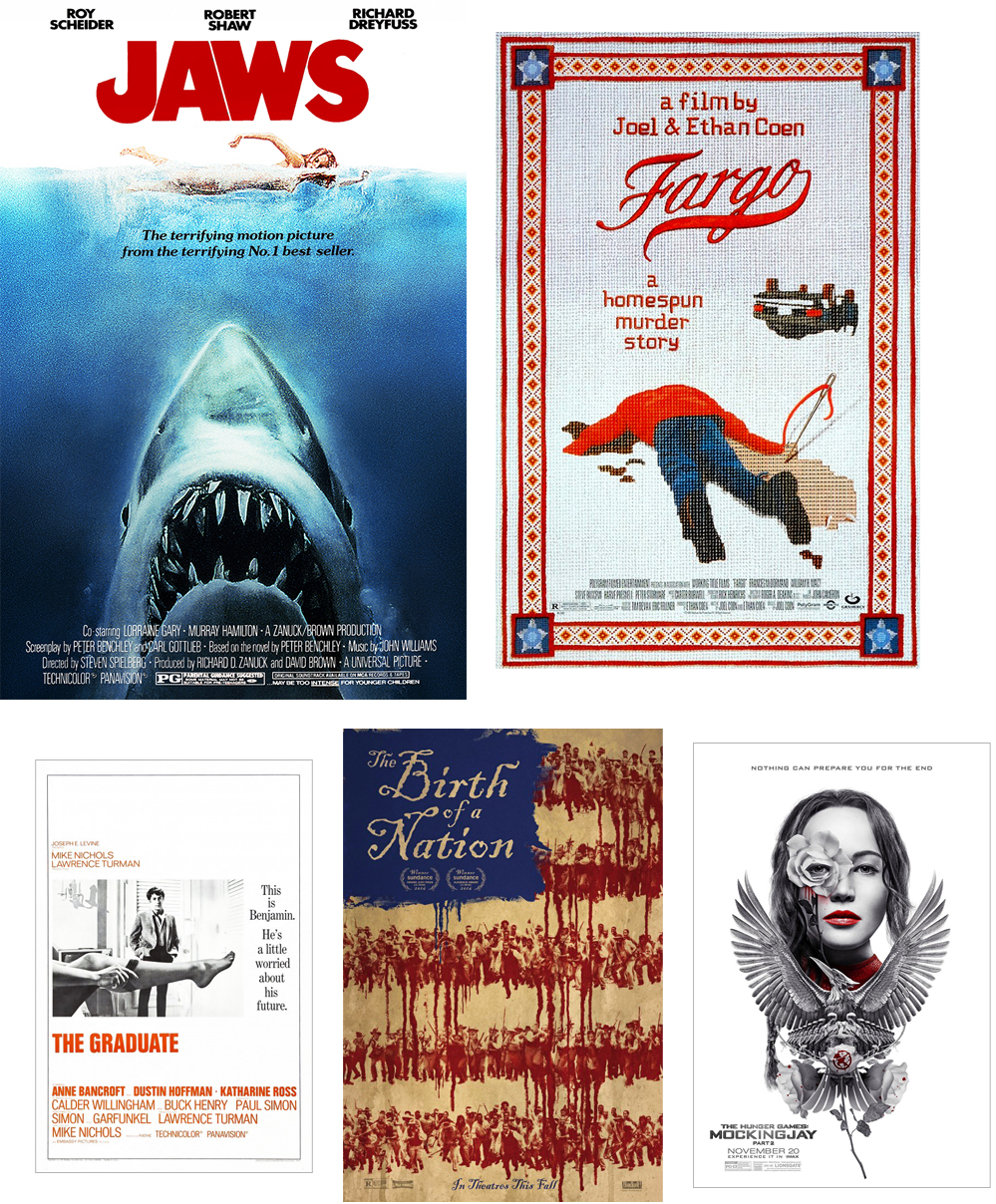 Molly Metzger’s Selections:
From 2012, Quentin Tarantino’s Django Unchained. Capturing the theme of the movie perfectly, we see a graphic depiction of slavery, freedom and retribution.
Milos Forman’s Best Picture winner of 1984, Amadeus. The man… The music… The madness… an inspired and dramatic image based on the original Broadway poster.
Pixar’s animated entry from 2009, Up. A minimalist design that tugs at your imagination and hints at the adventure that is soon to follow. 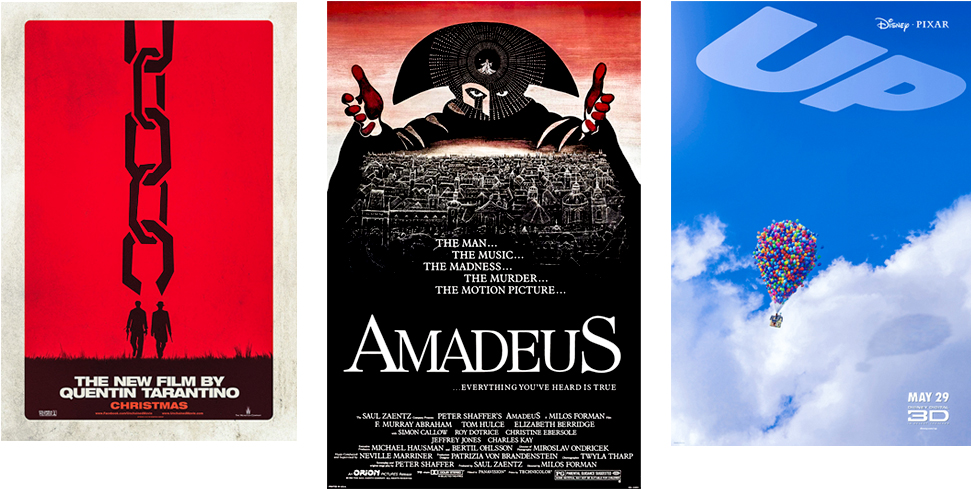 Michael Culpepper’s Favorites:
From 1994, Disney’s The Lion King. With this poster, Disney regains its former glory and its animation crown.
The 1980 Irvin Kershner classic Star Wars: Episode V – The Empire Strikes Back. A long time ago in kids’ rooms far, far away, this was the poster every Star Wars fan had on his or her wall.
John Carpenter’s Big Trouble in Little China. From 1986, nothing captures this decade’s craziness like Kurt Russell, mullets, kung fu and air-brushed illustrations. 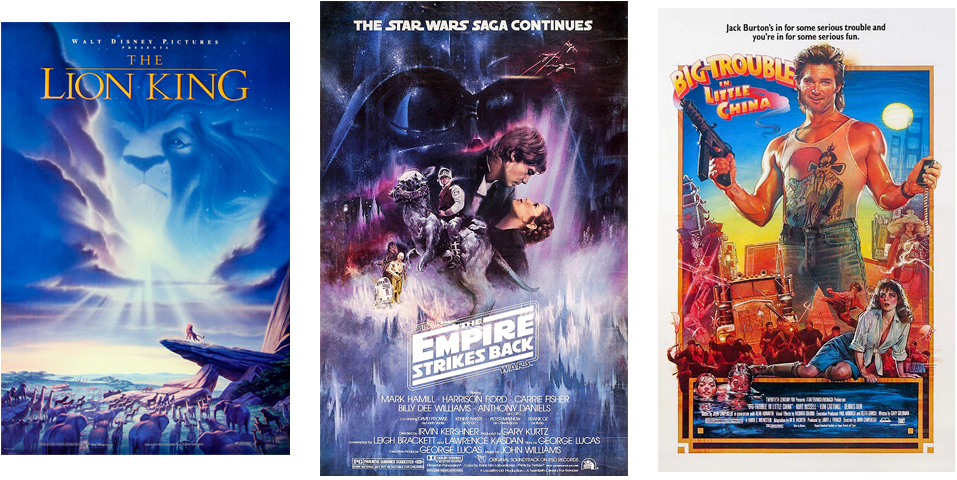 Gary LoBue Jr’s Nominees:
From 1996, Quentin Tarantino’s Pulp Fiction. A movie poster posing as a book cover, or is it vice versa? Brilliant.
Steven Spielberg’s 1993 Oscar winner Schindler’s List. It’s no accident that the list imprints over the inside wrists of the two individuals on the poster.
Steven Spielberg’s 1993 blockbuster Jurassic Park. A logo and tagline doing the heavy lifting. Simple. Memorable.
Bruce Brown’s 1966 documentary The Endless Summer. The poster that made a certain eight-year-old want to hitchhike to southern California.
From 1958, Alfred Hitchcock’s Vertigo. A dizzying display of typography, color and graphics. Another visual masterpiece by Saul Bass. 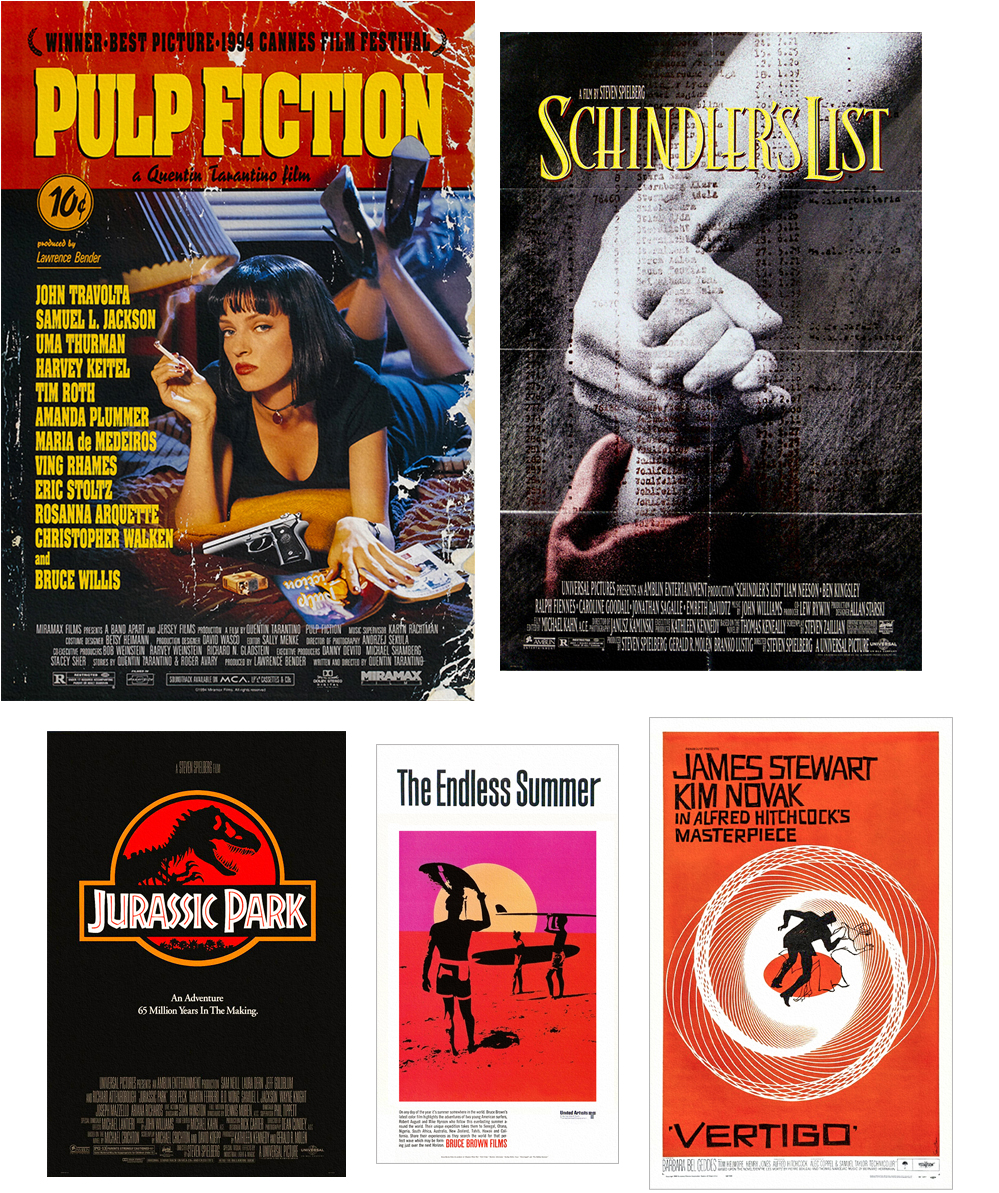 Bonnie McDonald’s Nominations:
From 2010, Tim Burton’s dreamy Alice in Wonderland. Colorful and full of the nuances you would expect from a place known as Wonderland.
Hollywood’s first blockbuster, 1939’s Gone With the Wind. The “As God is my witness, I’ll never love another poster again” poster.
William Friedkin’s 1973 genre-altering The Exorcist. The one light you want to stay away from, yet he has to go there. He has to go.
Tobe Hooper’s 1982 screamer Poltergeist. The simple, scary, white noise, little girl, “they’re here” in our TV, heebie-jeebies poster.
From 2012, the Joss Whedon-penned The Cabin in the Woods. The blood red / deathly black colors are eerie, and the copy line, too hilarious for a scary-movie lover like myself. 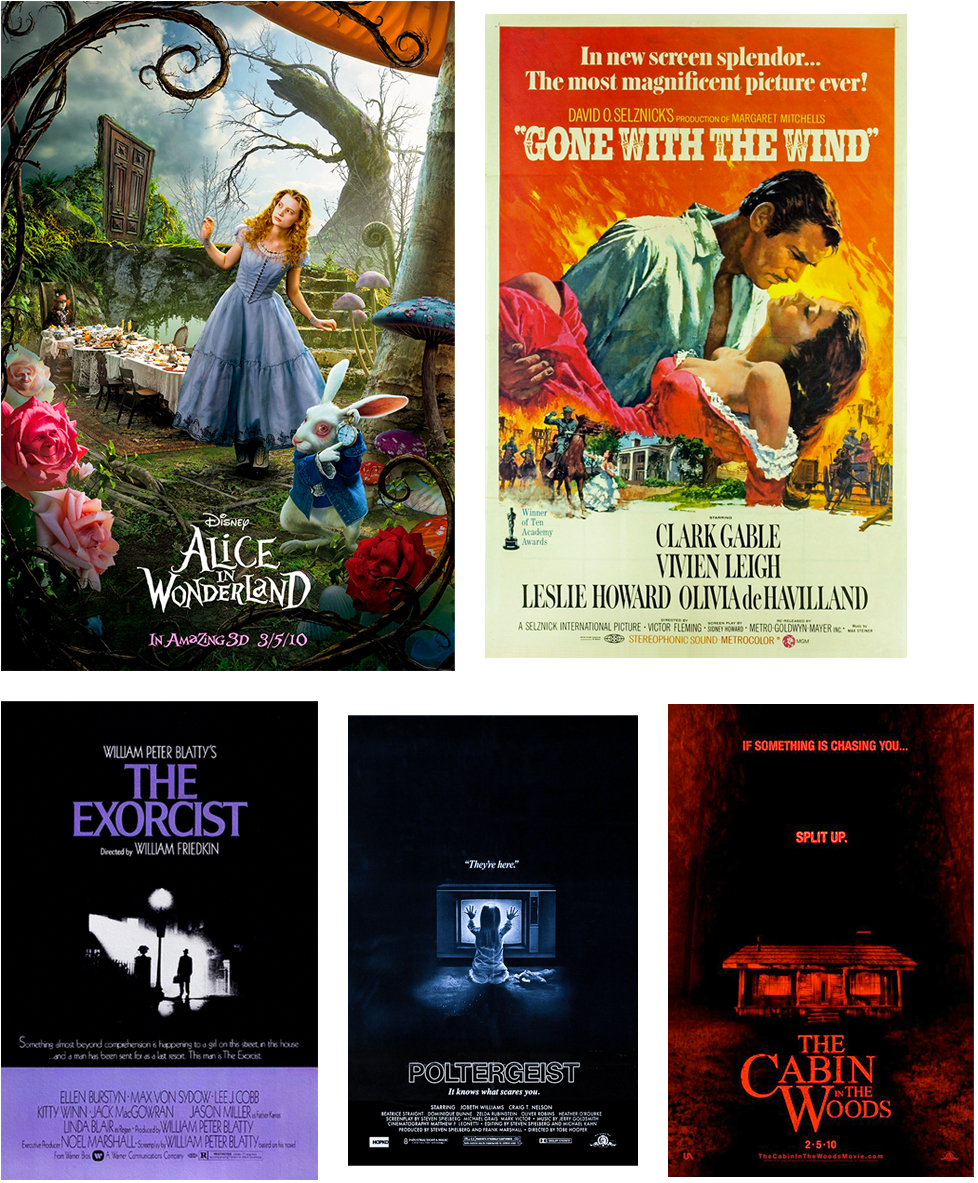 Cue the “Get Off the Stage” Music
We hope you found this Oscar edition blog informative and entertaining. Please comment by telling us about your all-time favorite movie posters.