Took a trip in March across the big pond to Europe. It was a whirlwind sightseeing extravaganza with stops in London, Dublin, Paris, Florence and Rome. Whilst everyone is taking selfies or snapping shots of historic landmarks and whatnot, I was getting strange looks for snapping shots of subway billboards, type on manhole covers, logos on menus, graffiti and the like. My graphic design peers understand, but everyone else, not so much. Don’t get me wrong, I’m in a bunch of selfies and have a plethora of typical tourist pics, too. But you’ve seen those before. So, instead, take a tour of Europe through the lens of this graphic designer.

Useless “European” trivia for you – The “W” of Clark W. Griswold stands for Wilhelm. D'Orsay Museum Subway Transit Billboard
It's like someone color-coordinated the subway chairs with the artwork.

Converse Subway Billboard - Paris
One billboard of many for Converse's "Made by You" campaign for Chuck Taylors. Better Call Saul - Paris
"Having a lawyer above the law." I like Saul. Good to see he's popular in Europe. Piero della Francesco Museum Exhibit Billboard - Rome
Bodoni seems to be a favorite typeface in Rome. Go figure. This billboard is located in the center of Roma Termini Train Station. 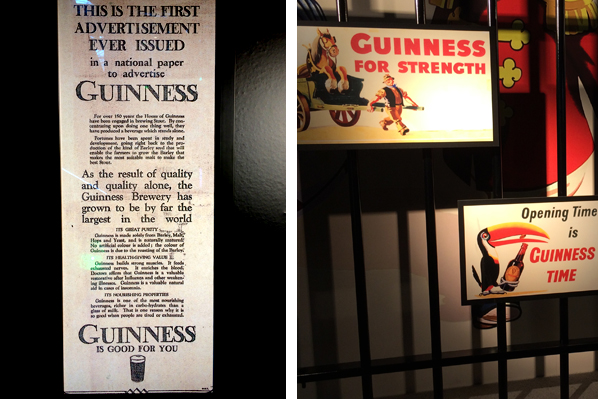 Guinness Beer Advertising - Dublin
The tour of the brewery featured the history of the brand's advertising.

The Euro Store
Didn't see a WalMart, but found the European version of a Dollar Store. Concorde Metro Station - Paris
If you like typography, you'll love this subway station. Metro Billboard - Paris
Yes, I stopped at stations just to shoot pics of some billboards. Diesel Jeans Subway Translight Billboard - Paris
I'm pretty sure I'm not in the targeted demographic for this message. Hotel Galileo Window - Florence
Our hotel in Florence, Italy. Like the combination of the gold type and the white lace behind it. Paris Metro Signage & Various Posters - Paris
Near Moulin Rouge, this is, without a doubt, my favorite subway station signage. On the right, these posters are pasted over the rivets of the Eiffel Tower base. Oinos Wine Bar & Bistro Signage - Paris
I'll let you come up with your own interpretation. Don't know if this is a knockoff or part of a restaurant chain, but the original Oinos appears to be in Budapest, Hungary. Printemps Subway Billboard - Paris
One component of a massive media blitz centered around the 140th anniversary of this Paris department store.

RER Train Station Billboards - Paris
Nothing like some Impressionist Era artwork to dress up a drab transit station. iPhone 6 Scaffolding Scrim - Paris
This campaign was featured in all of our stops in Europe. It simply displayed wonderful photographs all shot with the iPhone 6.

Birra Poretti & City Library Posters - Florence
Two contrasting poster styles. In the poster on the right, the books create a type headline that translates to "Do not forget to read." Bourbon Street - Paris
Can I get a big "Who Dat?" Underground Author
I love subway systems. I'm fascinated by them.