Are You Ready for Some Brand Extensions? 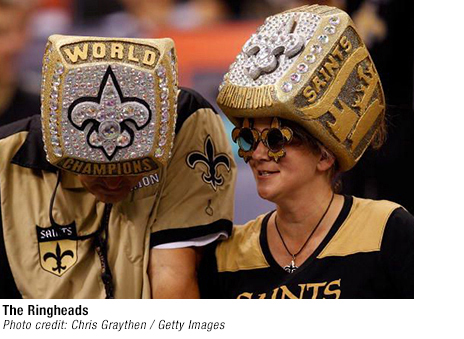 In a couple of weeks, one of the most successful sports leagues in history will kick off another year. A recent Forbes magazine article about the National Football League notes that “The NFL’s 32 teams are worth, on average, $1.17 billion (each).” This compares to the world’s top 20 soccer teams’ worth of $968 million, the average worth of Major League Baseball’s 30 teams at $744 million and average values for the NBA teams of $509 million.

Aside from the extremely lucrative TV deals, the teams of the NFL realize substantial revenue from the sale of licensed merchandise, which can include anything from t-shirts to toilet tissue with the team’s logo prominently affixed. Best guesstimates on sales figures for this merch are north of $3 billion each year.

The NFL brand is so strong and so popular that even missteps from the commissioner – from the questionable “Bountygate” penalties to rule changes which erode the foundation of the game – fail to tarnish its polished image. Making this well-oiled machine continue to print money requires a lot of people. The staff of NFL Properties is composed of hundreds of marketers, licensing experts and more than a few attorneys. It works with its board of directors, the owners of the 32 teams, to rigorously maintain the integrity and uniformity of the NFL brand. Why? This brand has some of the best-known logos, mascots and merchandise on the planet and the league wants this cash cow to remain pristine.

However, managing a brand can be a tricky thing, especially when this involves a group of customers – the NFL fans – who are the most outrageous, passionate and loony renegades in the world. You think herding cats is tough? How about keeping crazy NFL fans (who have paid a lot of money to be in the stands) from doing whatever they want to do with their favorite team’s brand? Good luck with that.

Thinking about this tendency of football fans to mold their favorite team’s image into their own, quirky world caused senior art director at Prejean Creative, Gary LoBue, Jr., to scratch his chin and wonder: Is this tendency of fans (especially those with a penchant for exhibitionism) to go a little crazy on NFL Sundays a good thing or bad thing in terms of team branding? This philosophical ad guy further speculated that this fan interaction with their team could be seen as a very effective brand extension. More on that later.

What is a Brand?
One of the best definitions for the term brand, comes from marketing savant Seth Godin. In one of his daily blogs from December, 2009, he noted: A brand is the set of expectations, memories, stories and relationships that, taken together, account for a consumer’s decision to choose one product or service over another. If the consumer (whether it’s a business, a buyer, a voter or a donor) doesn’t pay a premium, make a selection or spread the word, then no brand value exists for that consumer.

The NFL and its 32 teams are replete with memories, stories and expectations. If one follows professional football for any length of time, these three elements of its brand, plus dozens of additional factors become integral to being a fan. Maybe it was due to brilliant marketing or (more likely) to serendipity or both, but the NFL brand has evolved into an entity that inspires extreme passion among its fans. This passion can sometimes explode in very creative ways.

Who Dat?
Kevin Prejean, one of the two people whose name is on the door of Prejean Creative, answered our question about what motivated fans to “repurpose” NFL team brands with a trip down memory lane. “Gary and I are old enough to have been around when the Saints first came to New Orleans. In 1967, this team was like a lot of expansion teams – pretty awful. Hey, 20 years passed before they had their first winning season and the team went 33 years before their first playoff win! My loyalty was truly tested. However, as I grew up and lived through horrible seasons, as well as the amazing years, I became a fan of the team. Like every fan, I’ve grown to identify with my team.”

Kevin’s devotion to the New Orleans Saints is revealed by his status as a season ticket holder for the past 8 years. Every Sunday home game, he and thousands of other Saints fans witness what LoBue calls “brand extension.”

The black and gold of the Saints, its fleur-de-lis logo, the biblical characters (remember, they ARE the Saints), current affairs, animated superheroes and a menagerie of other characters are all on display at the game and add a particularly South Louisiana flavor to the spectacle on the field. Some of the favorite Saints fan characters have been: 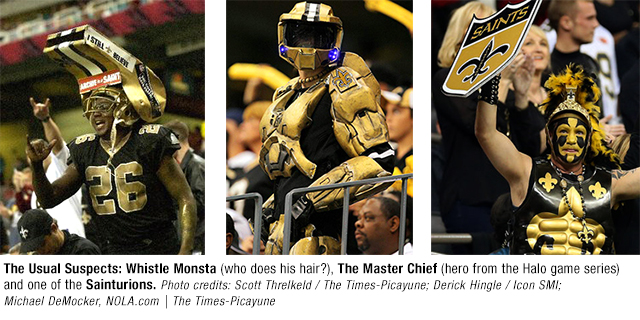 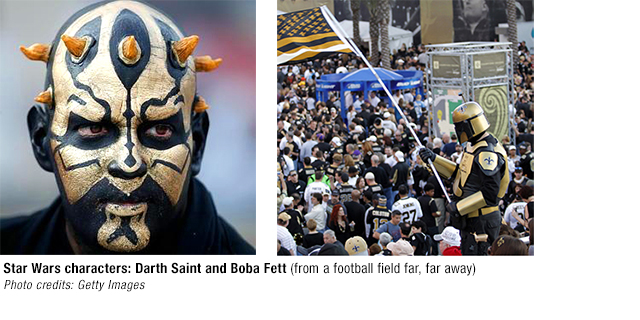 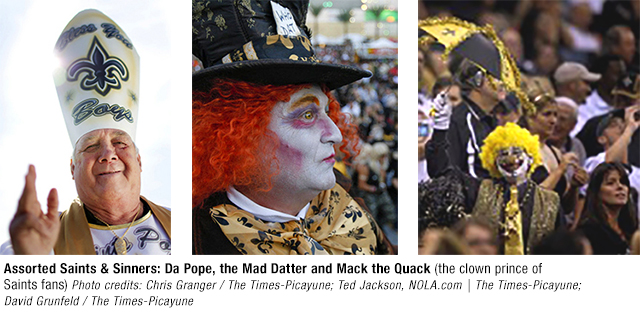 Even the world-famous, catch-all description of Saints fans – Who Dat? – was fan-inspired and not hatched up by a bunch of creative types at the NFL or New Orleans. This brand extension became so popular, there was rumbling that some NFL executives wanted to officially license it and force anyone who used it to pay the league a royalty. This was, of course, nonsense and cooler (less rapacious) heads prevailed.

The Saints are not the only NFL team whose fans have extended the brand. Anyone who’s ever watched the Washington Redskins knows about the guys wearing women’s dresses and pig masks – aka The Hogettes. Cleveland has its Dawgs and they even keep them in the Dawg Pound at the stadium. The Green Bay Packers are found in the state of Wisconsin and rather than extend the team’s brand (meat packers?) the fans wisely chose to call themselves Cheeseheads and proudly wear hats that look like a large slice of cheese. 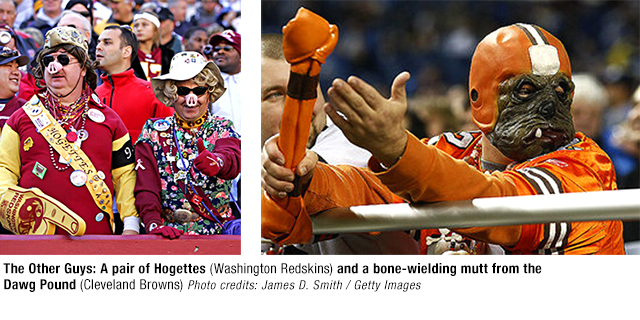 Are These Brand Extensions a Good Thing or Bad Thing?
Ultimately, an NFL team is like any business. It must attract customers and keep them happy by winning more than it loses. To continue this business analogy, everyone agrees that successful branding can help instill customer/fan loyalty. But what about the weird brand extensions of NFL fans? Does this help build support for the team?

We went back to the guy who started this NFL brand extension discussion in the first place. Gary LoBue notes, “These crazy fan extensions of the team’s brand most assuredly help the team build loyalty. Every business endeavor hopes to build a tribe of loyal customers. In the case of these off-the-wall fan variations in the NFL, the tribe has simply taken over!”

As we get ready to tee-up the 2013-2014 NFL season, this is a good time to get those giant “We’re Number 1” Styrofoam fingers and your favorite team-colored costumes out of storage and get psyched for the long, challenging season ahead. The boys on the field can’t do it without us, so let’s get those brand extension ideas ready to roll!

Prejean Creative believes that brainpower is the most effective marketing tool there is. We focus on well-reasoned concepts, compelling design and meticulous execution. If you think this fundamental, disciplined approach makes sense, contact us and we’ll share our thoughts with you. Otherwise, please enjoy Drawing Conclusions.
View all posts by Prejean Creative →
This entry was posted in Branding, Fun Stuff, Louisiana, Marketing, Miscellaneous, Popular Culture, Promotions and tagged Brands, football, Forbes, Merchandising, New Orleans Saints, NFL, NFL fans, Who Dat. Bookmark the permalink.

One Response to Are You Ready for Some Brand Extensions?