The Eyes Have It

Posted on September 9, 2013 by Prejean Creative 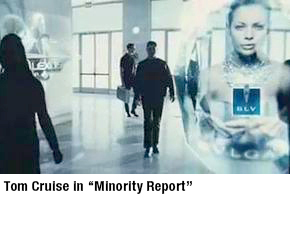 It turns out that the message of the movie The Minority Report was prescient. You might remember the scene where Captain John Anderton (Tom Cruise) was quickly walking through the shopping mall of the future while personalized ads – from beer to boxers – were catching his eyes. If not, just scroll below for the clip.

The developers and purveyors of digital media – websites, social networks, search media, email and others – have long boasted that this media has the ultimate benefit over traditional media such as newspapers, outdoor, radio and television: the audience analytics allow it to be quantifiable. The argument goes that analytical tools such as Google Analytics and other, more sophisticated tools can get an accurate count of the number and behavior of consumers who engage with this media and this precision is not possible with traditional media.  The digerati have claimed – ad nauseam – “if it can’t be measured, it can’t be managed.”

This is a very compelling argument for ad agencies like Prejean Creative. We must investigate the benefit vs. cost, reach vs. frequency and the ying vs. yang of digital vs. traditional media every day. However, this analytic advantage of digital media over traditional media could change if digital behemoth Google develops a new advertising audience tracking tool.

Don’t look now but those intrepid Googlers have been hard at work in their secret laboratory again. They’ve received another patent that could change the world of advertising and this was reported a couple of weeks ago in science and technology website Phys.org.

In the near or distant future – depending on the decision of Google – advertisers might be adding more hyphenated phrases to their lexicon. To the group of “Pay-per” phrases such pay-per-view or pay-per-click, we could be adding pay-per-gaze. Here’s why.

Accurately Measuring Media’s Impact
John Wanamaker, a 19th century retail pioneer from Philadelphia, is credited with coining the phrase still used by 21st century marketing directors. Wanamaker famously noted, “Half the money I spend on advertising is wasted; the trouble is, I don’t know which half!” Even the pioneers of advertising were trying to figure out how many and who was consuming their ads.

Advertising trade publication, MarketingWeek, noted, “Google has been granted a set of patents for eye-tracking advertising technology, which could detect when a person is looking at an advert – be it online or offline – and infer their emotional response to it.”

How will this tracking work? No one is really saying yet, but the Phys.org article suggests the tracking technique, based on the “gaze,” could be implemented with a head-mounted device, such as Google Glass. Obviously, it would be no coincidence for the multibillion dollar Google to incorporate an existing, albeit nascent technology, in another service. That’s how they got to be a multibillion dollar company. 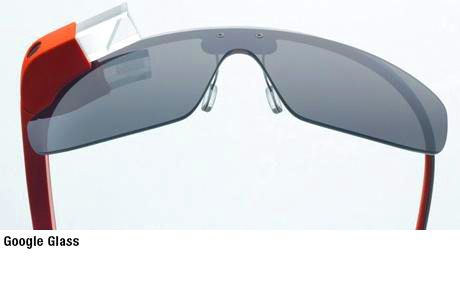 Once the “gaze” of an ad occurs, the tracking mechanism could communicate this action to a server, allowing Google to create “pay-per-gaze” that would register whether an individual has looked at an ad before charging the brand. This is similar to “cost-per-click”. The MarketingWeek and Phys.org articles note the technology could infer “emotional state information” by measuring a user’s pupil dilation. This aspect of the technology could pose a teeny, tiny problem.

Using pupil dilation to gauge emotional responses has been seen as problematic by academics and neuro-ad geeks in the past. One of these nay-sayers, Mihkel Jaatman, commented on the news by saying, “Polluting factors such as sounds or changes in light affect pupil dilation too much to properly isolate people’s reactions to ads. While pupil dilation could work in a lab, with a closed door, perfect lighting and nobody making noise, it’s almost impossible to measure in a real-world setting.” Google will have to work this problem out, but fortunately for them, they have plenty of cash and smart people wandering around to do this.

This tracking tool also presents yet another privacy problem for the world’s biggest search engine. However, the patent notes “an individual’s privacy would be protected by the removal of personal identifying data – which would also be encrypted – so advertisers would only be provided anonymous analytics.” The patent also suggests it could offer users opt-in or opt-out privileges, to control the type of data being gathered and to whom it might be shared.

We’re Going to Need a New Acronym
Clearly, this technology is not ready for use by any advertising agency’s media department. It may take decades to work out the logistic challenges noted above and even if this occurs, the Google gaze technology may find its niche in marketing research environment – similar to focus groups – rather than being used as we scan magazines or recording our responses to billboards.

In fact, analytics from pay-per-gaze may never show up in the Prejean Creative media buyer’s in-box. A Google spokesperson noted, “We hold patents on a variety of ideas. Some of these ideas later mature into real products or services, some don’t.”

However, if the bugs are worked out on this little bit of intellectual property, it will forever change the way traditional advertising is measured. It would also extend Google’s online/digital advertising business into more old-school media such as newspapers, outdoor and magazines. Time will tell if this pay-per-gaze, or pay-per-peek, as some are calling this technology, comes to fruition.

If, however, it becomes a part of the media buyer’s tool kit, these data denizens will have to invent some kind of snappy acronym to call it. CPM is taken and GRP is already being used. We like PPG – point-per-gaze. What do you think an appropriate acronym should be? Comment below.